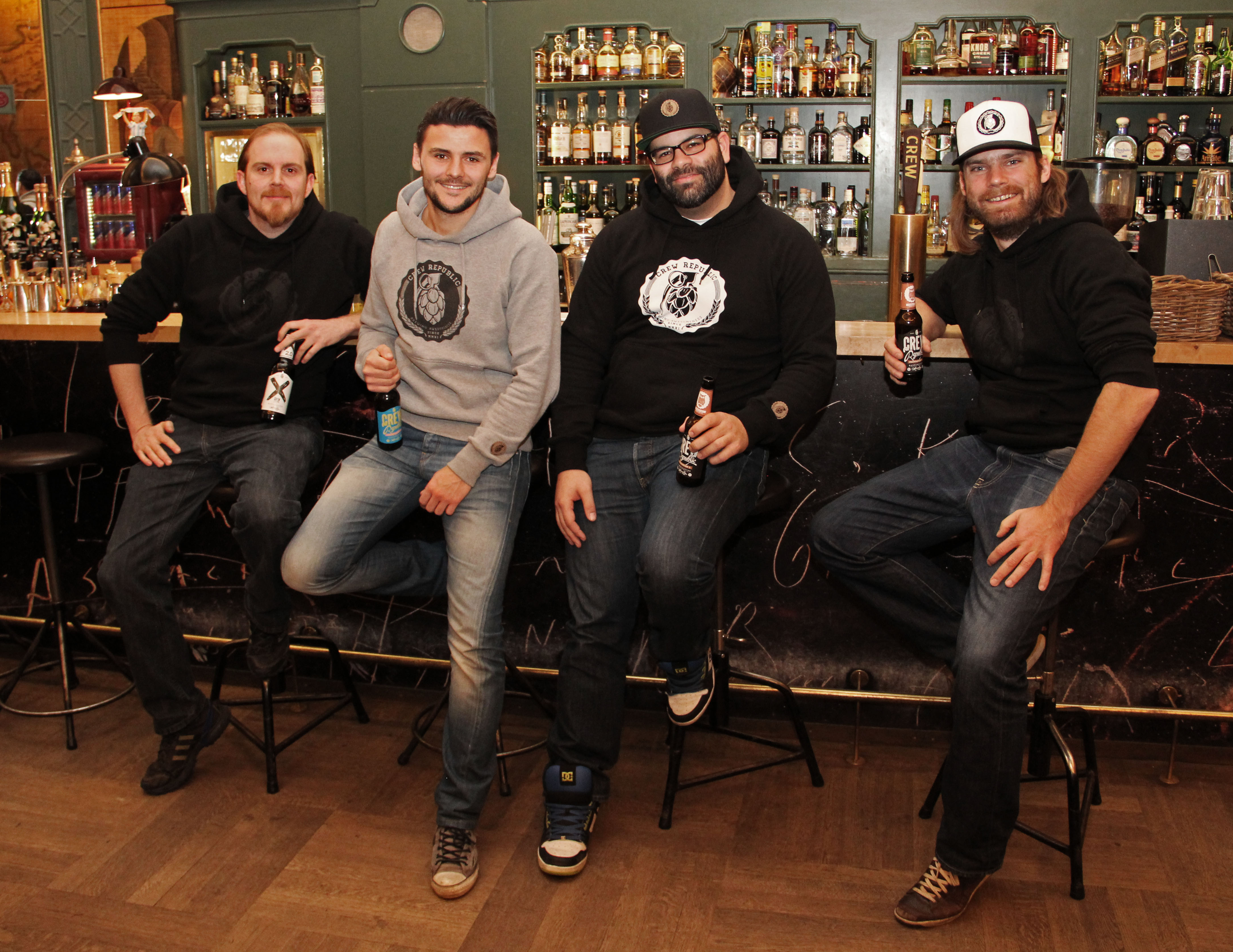 Considering they are five guys, Crew Republic is, for the craft beer scene, a proper company. Wide selection, trendy design, an American brewmaster – they’ve got it all. Just a tiny thing missing for the guys from Munich: their own brewery. 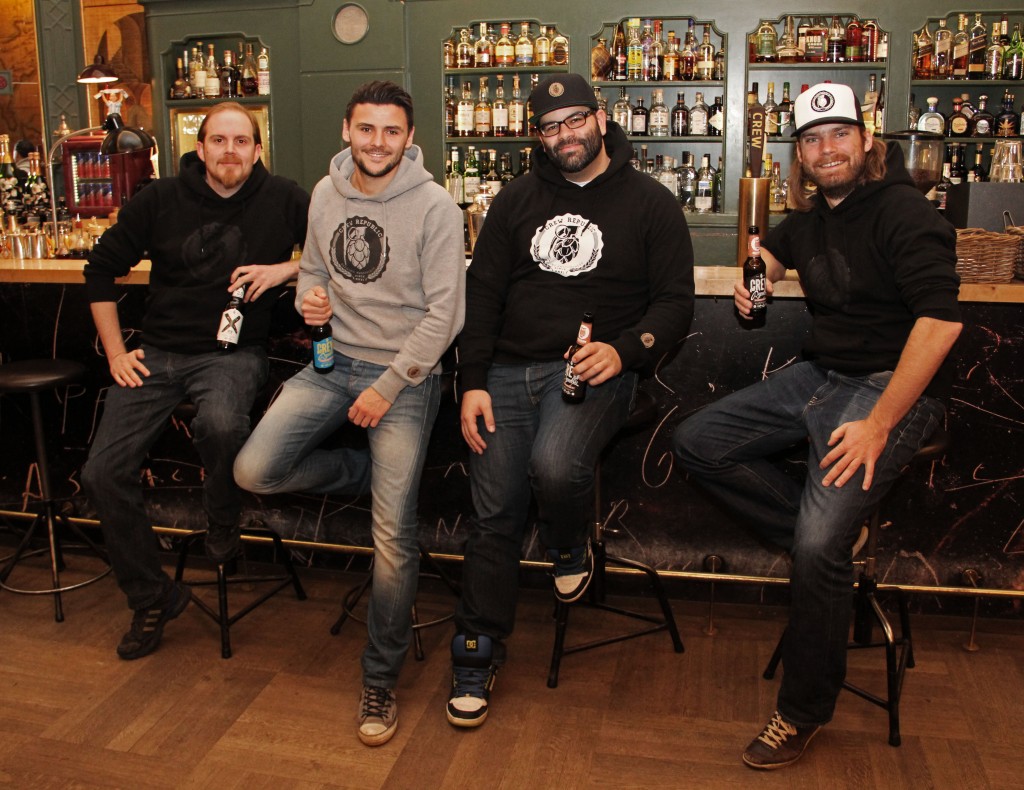 How nice: the whole company appearing for the interview at the Goldenen Bar in Haus der Kunst, Munich. Well, nearly. Actually they are five, but only four are sitting here right now. May I present: Timm, Jan, Manuel and Richie. Together they’re Crew Republic brewery. The craft brewery formerly known as Crew Ale Werkstatt. But why the change?

Two years ago Timm Schnigula and Mario Hanel founded a beer brand in Munich. After they graduated with degrees in business administration they both worked for a consulting company. But eventually they didn’t feel like collecting frequent flyer miles, wearing cufflinks and putting up with all the other annoying things present in the business world. So they quit their safe and well-paying jobs, took a few courses in brewing, and finally started to do something that truly came from the heart and was a lot of fun: Beer. Craft beer. And it sold quite well. So far, a real success story.

Last summer, Schingula and Hanel entirely rebuilt their small company. They polished their corporate design and hired new people. Considering the small scale of their business, a lot of people: someone for marketing, a sales expert, and a proper brewmaster. Someone from the US, actually. They widened their product range and took a chance on a new, different name. Crew Ale Werkstatt became Crew Republic brewery. This marked the first real relaunch in Germany’s young craft beer scene.

“On the one hand we realized that everything was a bit confusing: Is our name Crew Ale or Ale Werkstatt, and what is our beer actually called?” explains Schnigula, formerly a consultant. “So we figured we should tidy things up. And improve our design. Because the initial one was made a bit too casually.” The crew knew they had to hurry with their changes. “Even though we were a young company, Crew Ale had already become a concept, so we wanted to keep parts of it.” The “Ale” turned out to be the least usable part of it: “First, Germans automatically connect ale to the British real ale. Basically flat and warm beer. Second, we had limited ourselves in terms of further development.” It’s logical: if a company is called Ale Werkstatt, it’s harder to switch and eventually brew bottom-fermented beers.”

Now at Crew Republic all of this is possible, and much more – although maybe not as much as Richie would like: “The Imperial Stout and the Barley Wine are a start. But we could do more extreme things”, he says. In German. Good German. The man from Virginia had specifically come to Germany to learn about brewing. Long before this, when he started brewing, he didn’t want to become a brewer, he said. Back then, it was just a hobby during university. But suddenly becoming a real brewery? Just an accident! It wasn’t until then that he thought: I should do this properly and come to Bavaria to get my brewmasters degree.

… and the Crew Republic soon became a brewery.

When Richie is talking about beer, he appears a little like a virtuoso surfer in a lull: full of enthusiasm, totally on topic, eyes wide open, with his whole heart, on fire – but no, not yet. Well, the German market is still young, the German taste still needs to develop and can’t be overrun with overly intense beers – that’s part of it. The other part: Richie does not yet have a brewery in which he can work his magic.

In fact, when Hanel and Schnigula started, they immediately thought about having their own brewery. “But the banks soon threw a wrench in our plans,” says Timm. No one wanted to finance them. So ever since, the Crew has been brewing gypsy-style in a brewery near Landshut two days a week. A lot of driving. And it’s not the same.

A short while ago they brought another investor on board. A hops retailer. With him, they acquired funding for their own brewery, a 20 to 60 hectoliter brewhouse – only the location isn’t yet clear. They have been looking for one since the beginning of last year, but it’s not so easy in Munich. “At the beginning we even had the romantic concept in mind that it has to be beautiful as well. At this point we would be happy with four walls and a roof that isn’t leaking”, says Timm. For Richie, maybe even the roof isn’t necessary. He’ll only let himself really be excited, he repeatedly says, when they finally get there. And then the Crew Republic brewery will be able to call a little piece of land their own.

The Devil Is In The Details

With his Braukunstkeller Brewery Alexander Himburg became one of the first German craft beer brewers. Instead of brewing everything under...