So, what about German Craft Beer?

Finally, it’s here. The craft beer revolution has taken over Germany. But why has it taken so long for craft beer to become popular in the big old land of big old beers?

The problem is that there was no problem: “German beer has always been OK”, said Garret Oliver, founder of Brooklyn Brewery, when visiting Berlin in 2012 as he presented his so called “craft beers” to a pretty much clueless audience of food and lifestyle journalists. I was one of those clueless journalists. “It was just too OK. Therefore people never really felt the need to drink something else.” However, American beer drinkers of the 1980s who were craving a beer that didn’t just taste like some water-downed, lame lager, didn’t have any opportunity to do so except by brewing it themselves. In Germany they could have always had a decent beer such as an Augustiner or a Schneider Weisse.

Also, the desire for a larger number of brewers to choose from didn’t apply in Germany with its more than 2000 breweries.
“The thing is, with all these breweries, you’d think you have a choice”, Greg Koch of Stone Brewing told me a year later, when he was touring Germany looking for a location to build his first European brewery. “But the truth is you don’t.” With as many names as you might find on the bottles on a German supermarket shelf, you will find surprisingly little variety among them. It’s all pilsner, lager, Weizenbier. And to be honest, many taste quite the same. Not bad – but not very exciting either. You could probably say just “too OK”.

“Germans don’t think much about their beer. For them, it’s like milk: part of everyday life, always has been and always will be”, Oliver said while pouring a fat and chocolaty stout into my glass, a beer style fairly unknown to me at the time. But at least he got me thinking about beer.

In the weeks and months that followed I discovered a few brewers among the many who wouldn’t just brew OK beer, but who were infected by the craft beer vibe that had slowly started to come over from the US, Great Britain, and Scandinavia. For example, there was Alexander Himburg from Braukunstkeller brewing fantastic pale ales in a tiny town in Odenwald, three Americans from Vagabund Brauerei bringing craft beer to Berlin, or Fritz Wülfing of Ale-Mania (formerly known as Fritz Ale), probably Germany’s first gypsy brewer. 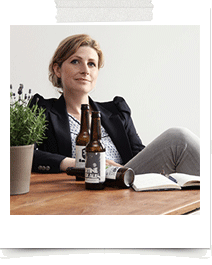 So have a glass of German craft beer …

Within two years the craft beer revolution started in Germany and many brewers followed: there are trained brewmasters who had enough of working in big factory-style breweries, as well as some homebrewers starting a business. There’s many young men and a few young women thinking about beer anew in this old beerland. There’s brewers who don’t give a shit about the German Reinheitsgebot.

Apart from brewing terrific craft beers, all those brewers have some amazing stories to tell about how they started making craft beer, when they were hit by the revolution, or what beer really means to them. These are the stories we’re telling on Hopfenhelden: the stories of Germany’s brave craft beer makers, the stories behind German craft beer.